My Father I Am?

Growing up I heard it a million times – we grow up to become our parents. 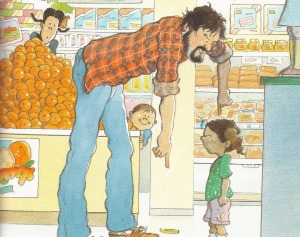 Well not me, no way! I wasn’t going to let that happen. I refused to become a carbon copy. Put my foot down to the very thought. I was different, I would break the mold!

Of course, I never planned on having children either. Hell no! I was the type that cringed
every time a kid made too much noise in a restaurant or supermarket. Yeah, that’s right; I was the single, unsympathetic snob. Get over it already!

I had dreams for a super successful career that would keep me busy 75% of the time, and
occasional rendezvous with the wedded husband (doesn’t that sound simply romantic? Yeah – NOT). I would have staff to keep the living quarters clean and there would be no messy little ones to muck things up! Clearly, in this made-up dream of mine I was a rich  B!*$&.

Where did this ideal come from you ask? I can’t rightly say. I sure as heck wasn’t raised
that way.  I come from a happy, middle-upper class family. And we lived well, but not overly exuberant. Maybe it was the fact that many of the kids at my school were spoiled. And I mean rotten! That was in no way overlooked by me. No, that sort of thing never goes
unnoticed by a kid. When we all turned sixteen I got the twenty-five year old piece of junk that had been sitting in the garage for almost as long, while the other kids started driving something new, something pretty – well – I kind of felt that somewhere deep down.  And it really sucked.

But aside from those feeling of inferiority, kids were never part of the equation. So that meant I didn’t have to worry so much about transforming into the person that nagged constantly about turning off lights, making sure empty glasses made it from bedrooms to the kitchen sinks, or if you were lucky enough to have a small television in your room, turning it off when you left your private sanctuary!

But guess what! Life doesn’t always go as we plan when we are thirteen.

Somewhere between adolescence and halfway to my breakdown point in the midst of
adulthood, I became my father. How did this happen?

I had such a crystal clear understanding when I was younger. I knew John Gage and Roy DeSoto, of the Los Angeles County Fire Department, required my help with the latest  emergency more than those cups and glasses needed to be collected and returned to the kitchen sink. 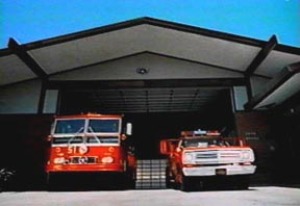 than sulking down the hall to turn  off some silly lights. Oh, and the little black and white television that I innocently left on in my room, that made the space more inviting – less scary.  So let it play on, Dad!  Besides, didn’t we have a maid for all that kind of stuff? Her name was M.O.M.

And every day we would hear, “I’m paying to light up the whole neighborhood?!” Dad could be such a kidder. Ha ha, Dad.

But now that’s me! When did this happen? I was so determined not to become my parents
and still – I slide right into the mold with ease, as if it was always meant to be. Maybe it was. Don’t get me wrong, I love my parents. They were/are absolutely great! But I wanted to be me – different.

Now – every day, every single light in the house is left on. I really mean EVERY SINGLE
LIGHT. I tour the place, room from room, hitting switches as I go. What’s the deal? Are we paying to light up the whole neighborhood? I have become the maid, that one known as M.O.M.

And every day, and I sincerely do mean that, both lights and televisions are on in the
kid’s room when no one is there. They are off, busy with projects in other parts of the house. No doubt turning on lights and television along the way leaving an electric trail for me to follow. Must I become a nag to help them learn? A nag is not what I want to be. But simple reminders don’t appear to work. The words go in one ear and straight out the other, without staying long enough to linger and swim around in their little brains for half a second.

Yesterday’s glasses have now been replaced with today’s plastic water bottles. They are
everywhere. I can mark every spot my child has stopped and dawdled for any length of time. A half-full bottle of water will be left as a sign at each spot , and undoubtedly some sort of snack trash; so much so that we’ve considered a padlock on the pantry. Double that amount can be found in their rooms (scavengers), along with all their dirty clothes that never manage to find their way two feet across the room to the hamper. 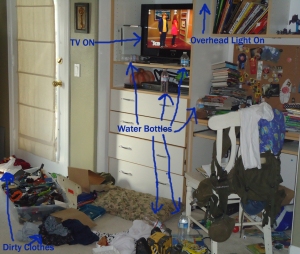 Is it a response to the conditions? Is this when I became my dad? God bless him, he
never fixed me. Does that mean there’s no hope for my kids? How about you, have you seen traits of your parents emerge in yourself?

Don’t forget to be checking back next week during Samantha Warren’s blog scavenger hunt to hunt for the answers and see what cool prizes you can win by playing all week long.

Debra Kristi is a mother, an author, a Pinterest addict, and sometimes DIY home decorator. Hang with her to escape the everyday stress. Be sure to leave your mind open to the fantastical.
View all posts by Debra Kristi →
This entry was posted in Blogfest, Nostalgia Lane, Parenting and tagged becoming your parent, blogging, Debra Kristi, growing up, Parenting traits, raising kids, Writer. Bookmark the permalink.

52 Responses to My Father I Am?