Immortal Monday: The Castle of Vlad Dracula “The Impaler”

Beautiful scene on the right, isn’t it? Age old castle set on a wintery hilltop. Perfect for an immortal story on Immortal Monday, wouldn’t you agree? What you are looking at is actually Bran Castle in Transylvania. It sits over the beautiful countryside of Romania. It’s a mighty grand, historic place built in 1212 by the Teutonic Order. 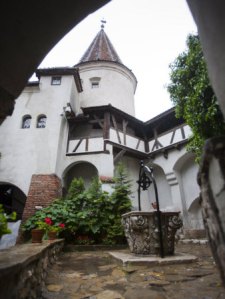 Towards the end of the 13th century it would change hands, falling under Saxon rule. There are stories of many underground tunnels hidden beneath the castle, some of which were found in 1920. For what purpose they were used, one cannot say precisely. But there is a lever mechanism hidden off the fountain in the courtyard, now well protected, that is believed to have run an old elevator now stopped in the shaft running from the fountain.  Curious investigation turned up an old tunnel entrance (or exit) in the village below that was a sad let down. It ran back into the side of the mountain, where it ended with nothing to see. The elevator shaft appeared to be here, but the elevator is not at the lowest level. It’s possible there is another level somewhere between the castle courtyard and the tunnel below where it has been stopped. It’s said the elevator design was added during the time of Queen Marie.

But do not be fooled! Many wander to this historical site thinking it is Dracula’s Castle, the original home of Vlad III Dracula (called Tepes pronounced tse-pesh) – the last prince of Wallachia – The Impaler. They are mistaken.  Today, the actual Castle Dracula sits in ruins on the cliffs near the Arges River and is called Poenari Castle.  It is considered one of the most haunted places in the world.

Located in Central Romania in the Vallachia Region, this functioned as Vlad Tepes residential castle or home. It sits at the top of a very steep hill, making it virtually impossible to defeat in battle. Attackers had to practically crawl on their faces to get up the hill. Imagine trying to do that against arrow fire.  It’s no surprise the castle never lost a war.  Especially with a ruthless ruler like Dracula in charge. 1500 steps up the hill had to be climbed to carry in supplies. Can you imagine? 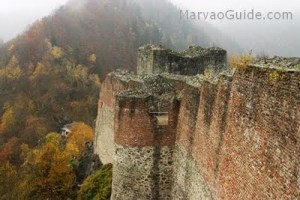 Lines where the stones change dictate years in the building

Poenari Castle ruins as seen from a distance

Painting of how it would have looked in its prime

Poenari Castle was first erected at the beginning of the 13th century by the first Romanian rulers. By the 14th century it had become the main citadel. Over the next few decades, the name and residents would change until it would eventually be abandoned and left to ruin. But in the 15th Century Vlad III Dracula saw the great defense potential in the site’s location, it being perched up on such a steep precipice of rock, that he had the site repaired and made it his home. It would remain his castle until his death, only again to fall into ruin.

Vlad Tepes was ruthless and harsh. He made a name for himself and inspired Bram Stroker’s immortal creature, Count Dracula. His story is one of true fascination. It’s possible he was a product of his situation and the events that happened to him. Most of the written information available on him is primarily from German pamphlets, due to the newly invented printing press and Vlad’s tendency to raid and destroy German villages.  He was often depicted sitting on a grassy knoll eating his dinner while surrounded by a forest of impaled bodies. It was this behavior that made him and Castle Dracula so famous.

Vlad died in battle having reached the ripe age of fifty. He left behind a legacy of death of blood. To some he was cruel, to others a fierce and strong defender.

Practically every month, like clockwork I get an email for a Dracula Tour. I don’t recall how I found them or if they found me, but I’m on their radar now. It’s pretty cheesy. Yet – I relish the idea of heading out to Romania and touring the castles.  They actually have the wrong castle marked as Dracula’s Castle on their site. Should I tell them? *Laughs* I  believe they are actually going off the vampire novel and not historical facts. So they may have everything marked just the way they want it.

Anyone want to plan a cheesy (expensive) field trip? Or hunt some ghosts? Mwwahahaha.

Now, because I have to go there…

What did you think when reports came out saying researchers had linked relations between Pattinson and Dracula? Apparently this link comes from his distant tie to the royal family. He is a distant cousin of Prince William and Prince Harry, who are both said to be distant nephews of Vlad. Did this information validate his role as Edward the vampire in your mind in any way?

While you are here, I invite you to check out other Immortal Mondays if you haven’t already.

Still interested in more Dracula? Count, that is. Check these great posts out:

Please know that I always appreciate your time and love it when you stop by plus take the time to comment. Huge thanks! If you enjoyed this post or any of my previous posts, I’d be delighted to have you follow by email or RSS for any future posts! Wouldn’t want you to miss out on an Immortal Monday installments.

Debra Kristi is a mother, an author, a Pinterest addict, and sometimes DIY home decorator. Hang with her to escape the everyday stress. Be sure to leave your mind open to the fantastical.
View all posts by Debra Kristi →
This entry was posted in Immortal Monday, Place & Objects and tagged Bran Castle, Debra Krsti, Dracula, Immortal Monday, Poenari Castle, The Impaler, Transylvania, Vlad III Tepes. Bookmark the permalink.

32 Responses to Immortal Monday: The Castle of Vlad Dracula “The Impaler”