Immortal Monday is celebrating Mother’s Day a day late. We hope that you all had a special weekend and enjoyed your day, be it with your children or mother. Today’s topic: the most unlikely of mothers, Selene from the Underworld film series. 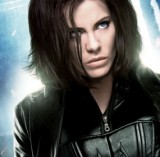 For those of you who don’t know, Selene is a vampire and a Death Dealer. Death Dealers are an elite group of specially trained vampires that hunt and destroy the Lycans (werewolves). It’s something she’s good at, and actually enjoys. I know this is really out there, but this is Immortal Monday and I thought we’d have a little fun with it.

If any kick-@ss immortal  female were to get my attention it’s going to be Kate Beckinsale’s Selene. I’m a huge fan. But not because she’s a vampire or a Death Dealer, for other reasons all together. And let’s face it, she’s super hot in that outfit. The ice blue eyes and Goth styled filming used in the movies don’t hurt either. Plus I simply love her boot and jacket. They should be mine!  😉

She is a survivor. She embodies strength and conviction.

Selene is the sole survivor of her family, if you can call being turned into a vampire surviving. She doesn’t let that destroy her. Instead she grows stronger. She uses what she knows of her past to fuel the person she becomes – a warrior. For six centuries she served with strength and conviction.

It’s this strength and conviction I admire and honor. Even more admirable is her independent thinking. That’s right, she’s not a drone. She doesn’t blindly follow the Vampire Elders when things don’t look right. She questions and follows her gut, and eventually, her heart.

She believes in ideals and possibilities to which the elders are too stubborn and set in their ways to open themselves up. Because in order to do so would require leaving a part of themselves exposed – vulnerable. But I believe it’s that exposure and vulnerability that makes her a stronger opponent in the end.

We may not be fighting supernatural beings on a daily basis (except in our imaginary worlds), but Selens’s conviction is a good model worth considering when we look to our own lives. We need not be dealing with life and death to apply strength and conviction to our course.

She believes and fights for love and truth.

She fights against the odds for love, a love that would join the species – a paranormal Romeo and Juliet, if you will.

She also fights for truth. A truth that has been buried and hidden for far too long, unwilling to be led along and fed the lies in order to live a happy life. Truth trumped the happy existence.

How about you? Would you prefer to live like an ostrich, sticking your head in the sand or would you want to know the truth? Does truth trump all? And does love always deserve a chance? Selene may be a vampire, but she exhibited emotions, acting on feelings like any one of us could easily do.

She may be an immortal, but she’s not infallible. She still feels, and like any of us, she doesn’t get to choose who her heart falls for. She makes mistakes along the way, but sharp thinking and quick wits give her an edge when she mistakenly falls for the wrong guy pitting her against the rest of the vampire clan.

It was a hard choice, but a strong one, choosing love over everything she had known for centuries.

She’s a protector and fighter.

It’s already been established that Selene’s a fighter. An excellent one at that. When she awakens from a fifteen year captivity to find she’s now a mother, she takes on the role of protector and will do anything in her power to keep her child safe.

I think many mothers can relate. This humanizes her. It’s an instinct seen time and time again in many species. Vampire and Lycan are not immune. And when her child expresses hurt over their reunion, how things had not gone as she’d imagined – Selene understands and comforts.

Her child. A concept she had a little trouble swallowing at first, since she slept through so many years. It was like a slap in the face. But the child has her father’s eyes and Selene’s core being wins out. She puts dealing with her pain of loss to the side while embracing her new found love at the forefront.

Can you think of anyone in your life who has done something similar? Your mother, yourself maybe? Mothers have a tendency to self-sacrifice often. The love for a child overcomes all reason.

But Selene would not be a stand out character had it not been for her determination. Her perseverance, strength, conviction, and fight for love and truth. Forget for a minute that she’s a vampire. Individuals like this are always worthy of our admiration, whether they be fictional or not. Don’t you agree?

Establishing that Selene is a vampire and dependant on blood as a food source, her supernatural abilities are…

Please know that I always appreciate your time, and love it when you stop by and take the time to comment. Huge thanks! If you enjoyed this post or any of my previous posts, I’d be delighted to have you follow by email or RSS for any future posts

Debra Kristi is a mother, an author, a Pinterest addict, and sometimes DIY home decorator. Hang with her to escape the everyday stress. Be sure to leave your mind open to the fantastical.
View all posts by Debra Kristi →
This entry was posted in Immortal Monday and tagged author, Blog, Debra Kristi, Immortal Beings, Immortal Monday, Kate Beckinsale, Lycan, Mother, Selene, Underworld, Vampire, werewolf, Writer, Writing Fantasy, YA, Young Adult. Bookmark the permalink.