Comic-Con. What a thrill ride! I have participated in this exciting event more years than I can recall.  I may be more of a geek, when it comes right down to it, than my husband. I care more than he does about checking on his company booth and grabbing a few shots. What’s up with that?

Activision showing off upcoming games on the CC floor and Activision on the outside of our hotel wall!
Yea, that’s right. Those people just wouldn’t get out of my way so that I could get a clear shot. Go figure.

My husband and I first met while working at a movie theater. My friend got me the job  and my husband would soon become my boss. Oh, I hear all you out there. Stop it! So I dated the boss man. Get over it! We were in college at the time. And there was still a big man in charge of us all.

Well, my someday husband loved movies SO much that his path would take him straight to Hollywood. His first stop along the career path, Paramount Studios. That love of all things movies and the writing behind them never dwindled, even though he hopped over to the gaming industry. So, when we attend Comic-Con there has always been a large focus on what? None other than the big blockbusters or huge television series panels. In more recent years (since Twilight) the populace crowd has discovered the coolness that is Comic-Con and turned it into an absolute MAD House! As a result, our focus has shifted. We now enjoy more and more of the smaller panels that still have a great deal to offer.

Last year was the first year I attended a bunch of writer’s panels. As a result, I discovered I needed to be on twitter. Later that month I was on twitter. I started meeting fabulous people and making great new friends. That’s how I met Krystal Wade, and she convinced me I needed a blog. I hesitated. looked around and found Kristen Lambs social media course. A few months later I had a blog and a wonderful new network of WANA friends. I reached out and meet Christine Ashworth, and through her got connected with LARA and RWA. I’m looking forward to the many new friends I’ll make through these wonderful groups. All this because of a writer’s panel at Comic-Con. Thank you Comic-Con! 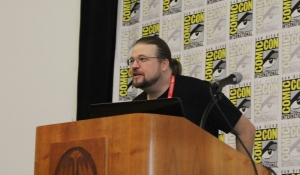 Maxwell Alexander Drake
Author of The Genesis Of Oblivion Saga

This year? This year I threw myself even deeper into the writer thing. Comic-Con added some wonderful “How To” courses taught by the fantastic Maxwell A. Drake and I was there for every single one. A total of eight in all. I highly recommend you swing by his blog and check out the courses and handout material. He has some great stuff to share! When Tameri Etherton showed up, she had me sitting in the front row like a good little student. If it wasn’t for her I might have tried to blend in with the walls near the back. LOL. 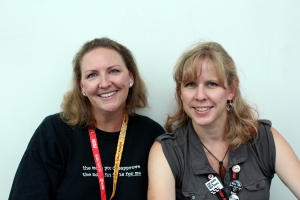 The Fabulous Tameri and Me!

Don’t worry, I got plenty of series premiers in on Wednesday evening (see previous post), plus a few scattered panels here and there to satisfy. Such as… The 10 year Anniversary: Firefly! (AWESOME) and Game of Thrones (George is a real character – that’s all I’m saying). I was falling asleep at the beginning of The Big Bang Theory and got sent back to the room (Thanks darling!). One lucky attendee won an actual trip into space! Sheldon was there via satellite. And my husband tells me The Walking Dead panel was rather boring as they weren’t allowed to talk about anything!

What else did I do, you ask? Hmm. Here is a sampling of the panels I chose:

Paranormal Love Potion was disappointing in that all the authors talked about was why they like to write about love and not how they incorporate the paranormal and love together in their stories. Hmm. I jumped over to…

The Epic Fantasy War panel. What a thrill! This hosted Patrick Rothfuss (KingKiller Chronicles), Christopher Paolini (The inheritance Cycle), and Brandon Sanderson (Allow of Law), among others. The panel was really too large for them to get through the questions in the time allowed and Raymond E. Feist (A crown Imperiled) liked to hijack the questions. Too funny! It failed to ever cover the topic titled. Oops. 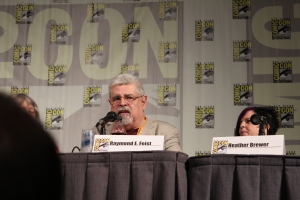 What’s Hot in Young Adult Fiction was singing to a packed room. Was everyone there to see Nathan Bransford like Tameri had hoped to catch up with? 😀 Fun panel. What did they say? They can’t tell you what will be hot tomorrow. Write what the muse inspires within you.

I sat through an interesting panel on self-publishing. I gotta say, a lot of the stuff I’ve been hearing and reading lately makes me reevaluate my stance.

Somehow I ended up in Star Trek Between the Cracks again this year. How did I let that happen? Interesting project, but just like last year, it felt like a large pitch asking for money. Um, yeah. But, hey! That’s where I saw Seth Green. For those of you who have seen the picture on my Facebook page, I was not stalking the guy. He just happened to be there! I swear! Just like I happened to be in line with Supernatural’s Crowely at the Marriott’s Starbucks. I was just too chicken to pull out my camera that time. It would have looked really tacky in that setting.

I mustn’t forget that I caught Elijah Wood, Bruce Boxleitner, and Tricia Helfer in Tron: Uprising. Completely unexpected. I lost my jacket in this room, too. So if anyone finds a Polo blue hoodie, please send it my way.

Panels, panels, panels. I do so love the panels. But the heart of what Comic-Con has become known for is the crazy on the convention floor. The insane booth setups and the wild costumes people wear. You can try your hand at the latest games still in development, catch peeks of your favorite shows on video loops, ogle and drool over hundreds of outstanding props and catch stars around every corner. 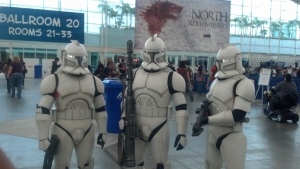 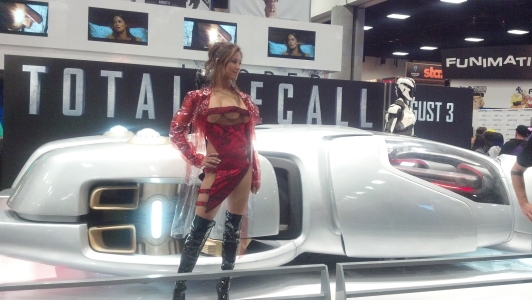 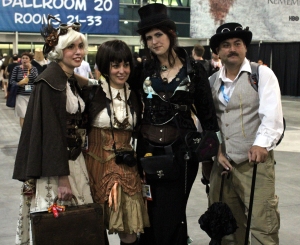 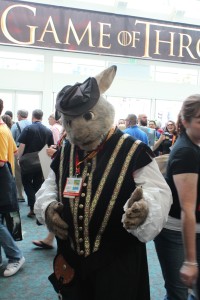 On the run from Alice! 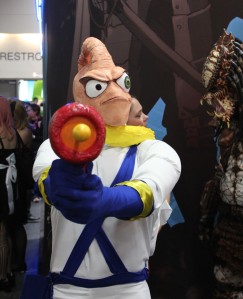 Comic-Con is all about celebrating the cool factor of the Geek. They even have a contest to celebrate how creative you can get – Are You a Geek Girl Trendsetter? Totally fun, it was really amazing to see what some of the women did. They made dresses out of vintage curtains or last year’s Comic-Con bags. Favorite characters and shows were represented. And this year’s winner was… The Millennium Falcon! – of course. 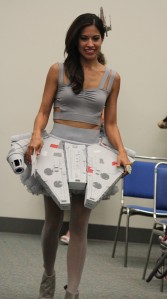 What an amazing costume that was. I was actually familiar with the winner from last year when she came as Ms. Death Star. Check this out:

Have you ever been to Comic-Con? Is it something you’d consider participating in? Are there other conventions you get involved in?

Thanks for stopping by! This concludes the 2012 Comic-Con recap.

Please know that I always appreciate your time, and love it when you stop by and take the time to comment. Huge thanks! If you enjoyed this post or any of my previous posts, I’d be delighted to have you follow by email or RSS for any future posts!

Debra Kristi is a mother, an author, a Pinterest addict, and sometimes DIY home decorator. Hang with her to escape the everyday stress. Be sure to leave your mind open to the fantastical.
View all posts by Debra Kristi →
This entry was posted in Entertainment, Getting Out and About, Life, Video and tagged 2012 Comic-Con, Activision, Authors, Geek Girl, Geek Trendsetter, Recap, San Diego Comic Con, Writer's Panels. Bookmark the permalink.