Love and Desire in the Greek God Eros : Immortal Monday

Last week we discussed Daphne on Immortal Monday, in direct relation to Apollo, whom we discussed a few weeks prior, and the tragedy that played out between them. Today it seemed only fitting that we visit the mastermind behind the madness, Eros.

If you missed the previous posts or need a refresher on the Apollo and Daphne tragedy, you may visit either post through the links provided above.

Eros is, or was, the Greek god of love.

His Roman counterpart is Cupid.

Originally depicted as an adult male embodying sexual power, in later years he would come to be seen as a small or chubby child. Much like the cupid we know today.

Eros is a complicated god in that the documentation of his origin is not consistent through the ages. In the beginning he was viewed as a primordial god. One with no mother or father. He was the fourth god to come into existence. That’s actually a really big deal if you think about it. First there was Chaos, then there was Gaia (the Earth), next there was Tartarus (the Underworld or abyss), and finally there was Eros (love). This is all according to Hesiod, a Greek oral poet and known major source on Greek mythology and archaic Greek astronomy around 700 BC.

Strangely, Homer (another famous Greek poet) never even mentioned Eros. But by 400 BC a pre-Socratic philosopher by the name of Parmenides makes Eros one of the first gods to come into existence, although not quite primordial. Eros is the child of Night (Nyx).

In later doctrine, he’s seen as the son of Aphrodite and Ares. He even shares a very popular cult in Athens, and every fourth day of the month is considered sacred to him.

Eros and another love god, Himeros (Desire), were present at the birth of Aphrodite. They accompanied her from the sea-foam. From this it has been interpreted to mean that Aphrodite gave birth to these love gods at her own birth.

So, if you think you have parental issues, you probably have much to talk about with Eros. The poor guy has got to be confused.

Love interest? Yeah, he didn’t just dish it out but fell prey to it himself. 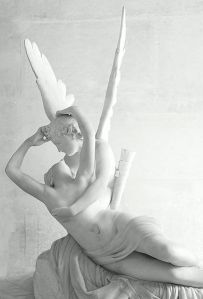 Aphrodite sent Eros on a little mission one day. Jealous of a human female that had men leaving her temple barren as they left to worship her instead, Aphrodite asked her son to make this mortal princess fall in love with the ugliest creature on earth. Instead Eros fell in love with her and swept her away for himself. Her name was Psyche.

Eros, Cupid, tall adult sexy eye-candy or small plump child, love is without argument one of the most important gods among them, if not THE most important. Eros was responsible for lighting the flame of love in the hearts of both gods and men. Could you imagine a world without his touch? I don’t think I’d want to live in that world.

Reminders: It’s never too late to jump on the Thor tour.  All you need to do is drop me a line. Thor has his own page now, by which you can track his progress, catch up on older updates, or just check out fun trivia, videos, and pictures that will be added to on a regular basis. Check it out! Find the link at the top of the page. Next update: Deliberately Delicious, coming soon. What has our guy been up to with the ever charming Sally?

Also, this blog will be relocating to a self-hosted site at some point near the end of the year. I hope you’ll follow us to the new digs. My fabulous designer, Laird Sapir, and I have some pretty amazing ideas (I think) and I hope you’ll enjoy what we create there.

I love hearing from you! If you enjoyed this post or any of my previous posts, I’d be delighted to have you hit the follow button or add this blog to your RSS feed! You may also find me on twitter at @DebraKrist. Tootles! Thanks for stopping by!

Debra Kristi is a mother, an author, a Pinterest addict, and sometimes DIY home decorator. Hang with her to escape the everyday stress. Be sure to leave your mind open to the fantastical.
View all posts by Debra Kristi →
This entry was posted in Immortal Monday and tagged Cupid, Eros, Greek God, greek mythology, Immortals, Love and Desire, Love god, primordial god. Bookmark the permalink.

35 Responses to Love and Desire in the Greek God Eros : Immortal Monday